In the 1830's Cross Plains was the primary settlement in what would soon become Whitfield County. In 1847 the settlement was absorbed into the town of Dalton. The name was given to the town by Edward White, a merchant from New York, who named the town after his mother's family. He also laid out the original streets in Dalton.

Due to the growing prosperity after the arrival of the railroad, Whitfield County was formed in 1851 from part of Murray County, which had earlier been broken out of Cherokee County. The County is named after Rev. George Whitefield, an early English settler in Georgia who also created the Bethesda Orphan House near Savannah. When the act was written to create the county, by the State Legislature, the "e" was omitted from the spelling of to reflect the pronunciation of the name. As a result of population growth in other areas of the county, the cities of Cohutta, Tunnel Hill and Varnell were later incorporated. 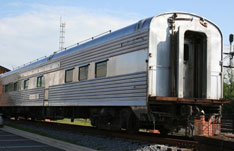 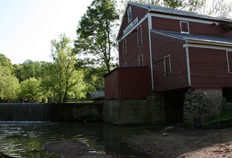 With the construction of the railroad, which prompted the establishment of Whitfield County and the county seat of Dalton, the community began to thrive. In 1855 Benjamin Franklin Prater built Prater's Mill to help support that thriving community. In addition to the mill, which offered the latest cleaning, grinding and sifting machinery of the time, they also offered a wool carder, syrup mill, saw mill, general store, blacksmith shop and cotton gin. The Mill was added to the National Register of Historic Places in 1978 and today hosts the annual Prater's Mill Country Fair in October.

Whitfield County is the home of many Civil War sites and events, from the beginning of General William T. Sherman's Atlanta Campaign to the "Great Locomotive Chase"

The first major battle of General William T. Sherman's Atlanta Campaign was in Whitfield County, May 8 - 11, 1864, at the Battle Rocky Face Ridge. The southern portion of the battle area, Dug Gap, was defended by Confederate General Joseph E. Johnston. General Johnston's forces were well entrenched and successful in turning back two advances by General Sherman's army. The success of this stand caused the Union commanders to avoid further attempts to take this area by force and manpower. 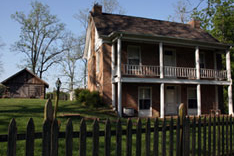 The City of Tunnel Hill, located in the northwest part of Whitfield County, is rich in Civil War and Railroad History. It is home to the infamous W & A Railroad Tunnel, a major player in the Great Locomotive Chase of the Civil War, and to the Clisby Austin House which served as a Confederate hospital during the Battle of Chickamauga and later as General Sherman's Headquarters during the Battle of Dalton.