Your Role As A Juror:

As a juror, you play an essential role in the American system of justice. You do not need any special skills or legal knowledge to be a juror. You do need to keep an open mind and be willing to make decisions free of personal feelings and biases. As a juror, you will listen to opening statements and closing arguments for two sides. You will also learn about and weigh the evidence that has been collected for the trial. Then you will be asked to make a decision about the case after you have talked it over with the other jurors during deliberations. During the trial, the judge serves as the court's presiding officer and as the final authority for the law. The lawyers act as advocates for their sides of the case. As a juror, you are responsible for impartially evaluating the facts presented and for applying the law to these facts as the judge instructs you. These combined efforts bring about the fair and impartial administration of justice in our county, our state and the nation.

For our jury system to work, it is essential that the courts and employers continue the long-standing partnership that ensures that all citizens are available to serve on juries when called. Without the cooperation of the business community, our system would come to a halt. This is an outcome that a democratic society cannot afford. We would lose a fundamental principle upon which we, private and corporate citizens alike, depend. The importance of your participation cannot be emphasized enough. Cooperation from employers strengthens the jury system.

As an employer, you must allow an employee time off to serve on a jury. Georgia Law ( 34-1-3) prohibits discrimination against an employee for attending a judicial proceeding in response to a court order or process.

Selection of a Jury:

When a jury trial is about to begin, the trial court judge requests a panel of prospective jurors to be sent to the courtroom from the jury assembly room so that the jury selection process can begin. After reporting to a courtroom, the prospective jurors are first required to swear that they will truthfully answer all questions asked about their qualifications to serve as jurors in the case.

When the selection process begins, the judge speaks to the jurors, telling them the names of the people involved in the case and their attorneys and stating what the case is about. The judge and the attorneys then ask jurors questions to determine if the jurors are free of bias (prejudice) or whether there is any other reason why any of them cannot be fair and impartial. This process is called voir dire.

The law lets the judge and the lawyers excuse individual jurors from service in a particular case for various reasons. If a lawyer wants to have a juror excused, he/she must use a "challenge" to excuse the juror. Challenges can be for cause or peremptory.

The process of questioning and excusing jurors continues until the final needed number of jurors are accepted for trial. The number needed is determined by the type of case and the trial court. The judge and attorneys agree that the final selected number of jurors are qualified to decide impartially and intelligently the factual issues in the case. When the selection of the jury is completed, the judge will administer the jurors an oath.

As a juror you should think seriously about the oath before taking it. The oath means you give your word to reach your verdict upon only the evidence presented in the trial and the judge's instructions about the law. You cannot consider any other evidence or instruction other than those given by the judge in the case before you. Remember that your role as a juror is as important as the judge's in making sure that justice is done.

Selection of a Jury:

Do not talk to others about the case. This responsibility requires that you not talk at all with the lawyers, witnesses, or anyone else connected with the case. The lawyers understand this rule. You will find that, even at the risk of seeming rude or unfriendly, the lawyers must avoid even casual conversation with you. In order to prevent even the appearance of improper conversation, a wise policy for you to follow is to avoid any contact with the lawyers or the parties. You also cannot talk to anybody about the case. There are important reasons for this: all cases must be decided only on the evidence presented in the courtroom. If you were to discuss the facts of the case or your impressions of it with your family, friends, or any other person, you might hear their ideas and might be influenced by people who do not know all the facts. If you believe that someone has tried to speak to you about the case, you must immediately report what happened to the judge.

Do not make up your mind before hearing all the evidence. It is also your duty not to form or express an opinion about the case to anyone. This means that you keep an open mind until you have heard the evidence from all sides and the case is given to the jury for deliberation. Only then may you discuss it with your fellow jurors and even then only when all jurors are present.

Do not conduct your own investigation of the case. As a juror you must not become an amateur detective. For example, you must not visit the scene of an accident, an alleged crime, or any event or transaction involved in the case. You should not conduct experiments or consult any other person or reference for additional information. If the judge feels that an inspection of a place is necessary or will be helpful, s/he will arrange and supervise an inspection by the whole jury. If you have a question about the evidence, let the judge know by handing a note to the bailiff and the judge will make a decision about your question.

As the trial begins, the lawyer for the plaintiff in a civil case or the prosecutor in a criminal case may make an opening statement telling you what they expect the evidence to show. The defendant's lawyer may also choose to give an opening statement after the plaintiff's attorney or prosecutor, telling you what the defense expects the evidence to show. The lawyers' statements are not evidence. Their purpose is to give you the framework of the case, the points of conflict, and the issues of the case that you will need to decide. Be careful that you do not let any of the information presented in the opening statements become evidence in your mind. Remember that the lawyers' statements are only their versions of what happened, not evidence.

Evidence may be presented by the attorneys in the form of a written document or an object (a gun, another weapon, a photo, an x-ray, or some other physical thing). These are called exhibits. Evidence may also include the testimony of witnesses under oath in the courtroom.

After all the evidence has been reviewed in court, lawyers for each side may present their final summary of the case, sometimes referred to as an argument. The lawyers can talk about reasons and make conclusions, but these are not evidence. You should listen to these statements carefully and consider them thoughtfully, but you must form your own opinion about the outcome of the case.

Judge’s Instruction On The Law:

Either before or after the closing statements by the lawyers, the judge will explain to you the law that applies to the case. This is the judge's instruction to the jury. You have to apply that law to the facts, as you have heard them, in arriving at your verdict. You must consider all of the instructions and give them equal consideration. Keep in mind that you must follow the law as the judge states it to you. You must accept and be guided by the instruction given by the judge of the case you are deciding.

Deliberation on The Law:

After closing statements by the attorneys and the judge's instructions on the law, the bailiff will take you to the jury deliberation room where you will begin deliberations. Your first duty is to select a foreperson. The jury should carefully select a well-qualified foreperson. The foreperson's duty is to see that discussion happens in a free and orderly manner, that the issues you must decide are fully and freely discussed, and that every juror is given an opportunity to participate.

Before beginning deliberations, the exhibits that you are to consider are given to you. During deliberations, if you feel you need further instructions or to have certain testimony read back to you, the foreperson will inform the judge through the bailiff. Since these purposes can be accomplished only by returning everyone (including the parties and the lawyers) to the courtroom, you should not make these requests lightly. The procedure usually takes time, but this delay is understandable if you seriously believe doing so is necessary or helpful to you in reaching a verdict.

Quite often in the jury deliberation room the jurors may argue and have a difference of opinion. When this occurs, each juror should try to express his or her opinion and the reasoning supporting it. It would be wrong for a juror to refuse to listen to the arguments and opinions of the others or to deny another juror the right to express an opinion. Remember that jurors are not advocates, but impartial judges of the facts. By carefully considering each juror's opinion and the reasons behind it, it is usually possible for the jurors to reach a verdict. A juror should nor hesitate to change his or her mind when there is good reason. But each juror should maintain his or her position unless conscientiously persuaded to change that opinion by the other jurors. Following a full and free discussion with fellow jurors, each juror should vote only according to his or her honest convictions.

In your efforts to reach a verdict, keep in mind that you should consider only the evidence that was presented in the courtroom. You should not guess or speculate about things not discussed in court, but you can draw reasonable conclusions from the evidence presented.

It is important to take the case you are deciding seriously. After all, if you were a party in the case, it would be important to you, and you would want the jury to give it serious consideration even if the controversy appears less significant to others.

All jurors should deliberate and vote on each issue to be decided in the case. When it is time to count votes, it is the foreperson's duty to see that this is done properly. In a civil case, the judge will tell you how many jurors must agree in order to reach a verdict. In a criminal case, the jury verdict must be unanimous. If the required number of jurors agree on each issue to be decided, the foreperson will sign and date the verdict, advise the bailiff, and return to the courtroom and await further instruction by the judge.

If a jury cannot arrive at a verdict within a reasonable time and indicates to the judge that there is no possibility that they can reach a verdict, the judge, in his or her discretion, may dismiss the jury. This situation is a mistrial, sometimes referred to as a "hung jury", and may mean the case goes to trial again with a new jury.

When you enter the Courthouse you will have to pass through security check points and metal detectors. No weapons of any kind are allowed inside the courthouse, including but not limited to; pocket knivves, box cutter and scissors. 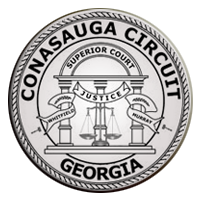