First called Cross Plains, Dalton developed at the junction of four Indian trails. These connected Red Clay (Varnell), New Echota (Calhoun), Ross’s Landing (Chattanooga) and Spring Place (Chatsworth). Here, a partly white village grew. The idea of removing the Indians to the west started during Jefferson’s presidency. The State of Georgia took the Cherokees’ land and gave it to white settlers is a series of lotteries ending in 1832. After gold was discovered in Dahlonega and settlers were intent on taking land, the Cherokees were forced on the 1838 Trail of Tears to Oklahoma. Many lottery winners sold their land.

In 1846 a group of Massachusetts businessmen bought most of Cross Plains from lottery winners. Edward White was sent as their agent to lay out a city and to sell lots. This venture was greatly aided by the July 1847 arrival of the Western & Atlantic Railroad, which soon connected Atlanta to Chattanooga. Over five thousand people came to see the first train.

Edward White laid out a city with wide streets and designated lots for parks, schools, homes and churches and the absolute center of town was marked by a spike in the train depot. The government and churches shared a small frame building known as the “Town House.” Dalton was named by White in honor of his mother’s family. Cross Plains was incorporated as Dalton in 1847 by an act of the Georgia Legislature.

Whitfield County was formed from part of Murray County in 1851 with Dalton as the county seat. Whitfield County was named for George Whitefield, a follower of John Wesley, and a famous evangelist missionary who came from England to Savannah but never came to North Georgia. The “e” in his name was dropped to conform to common pronunciation of the name.

As a result of population growth in other areas of Whitfield County, the cities of Cohutta, Tunnel Hill and Varnell were settled mainly because of their locations on the rail lines and later incorporated.

The Whitfield County Historic Preservation Commission is entrusted with the oversight of historic preservation efforts within Whitfield County including historically significant areas during Native American presence, later cultural and industrial settlements, the battlefields of the Civil War era, reconstruction after the war and the growth during the early 20th century. This county contains topography significant to the Civil War’s Atlanta Campaign, spectacular intact earthen and stone Civil War defenses, an engineering marvel of an 1850 tunnel through a mountain, and significant buildings within agricultural and industrial areas and those surrounding transportation development. Their focus is to preserve and manage the existing natural features in the topography (native foliage, forest, water features, stone outcroppings, viewsheds and slopes) and to preserve manmade features (stone and earthen defenses, a tunnel, bridges, industrial, agricultural and home structures). The focus also includes enhancing these sites for public access, education and enjoyment.

From the Whitfield County, Georgia Code of Orinances, Chapter 9, Historic Preservation Commission, "The County Commission designated a commission of ten members who have demonstrated special interests, experience or education in history, military history, archaeology, planning, architecture or the preservation of historic resources with the following purposes: (a) Support and further the belief that the Civil War and other historical, cultural and aesthetic heritage of Whitfield County, Georgia, is among its most valued and important assets, and that the preservation of this heritage is essential to the promotion of the health, education, prosperity, and general welfare of the people; (b) Preserve, protect and enhance significant local cultural, historical, Civil War, natural resources and aesthetic attractions to tourists and thereby promote and stimulate the business environment within Whitfield County; (c) Enhance all opportunities for federal or state tax benefits pursuant to relevant provisions of federal or state law; (d) Provide for the designation, protection, preservation, and rehabilitation of historic properties and historic Properties, and to participate in federal, state, local, or private programs to do the same; (e) Establish a uniform procedure for use in providing for the protection, enhancement, perpetuation, and use of places, Properties, sites, buildings, structures, objects, and landscape features having a special Civil War or other historical, archaeological, cultural, or aesthetic interest or value. (f) Commemorate the struggle and sacrifice of the Union and Confederate soldiers who fought there. (g) Provide the setting and tangible resources to educate a broad and diverse public constituency on the history on sites and in the vicinity"

In 1836 the Georgia Legislature passed a bill to build three new railroads, one being the Western & Atlantic Railroad that would connect the Chattahoochee River at Terminus, later Atlanta, and Chattanooga on the Tennessee River. By 1848, this railroad was complete except for the portion around Chetoogeta Mountain in Tunnel Hill. Passengers portaged luggage around the mountain on wagons for several years. Digging the 1,477 foot tunnel through the mountain began in 1848 by teams of immigrants and was completed in late 1849. The first train on the Western & Atlantic Railroad passed through the tunnel in May of 1850 opening up north Georgia to passenger and freight rail traffic and was the catalyst for great economic and population growth in Whitfield County. By 1860, Dalton was a larger town than Chattanooga, but the Civil War changed that. In 1861, Dalton was a pivotal railroad telegraph location for the “Great Locomotive Chase.” Later in the Civil War, the railroad was a target for Union troops to cut supply chains for the Confederacy, putting Dalton in the center of the Atlanta Campaign in 1864-5.

The railroad continues to be integral to the growth of Whitfield County for passenger and freight traffic. Currently, two major rail lines, Norfolk Southern and CSX, run through the county and converge in Dalton. Freight traffic is still important to the economy of the County, but there is no passenger service. 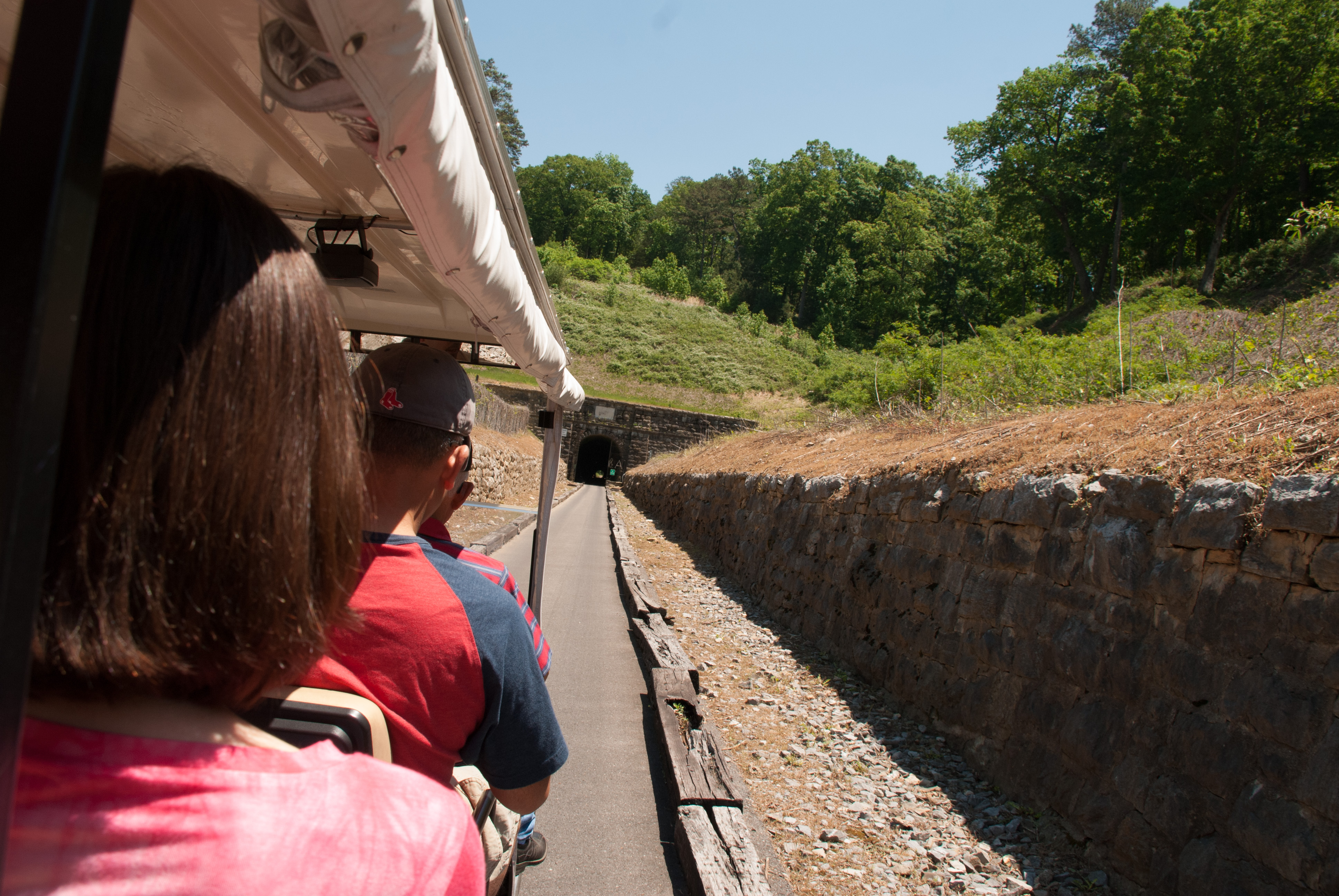 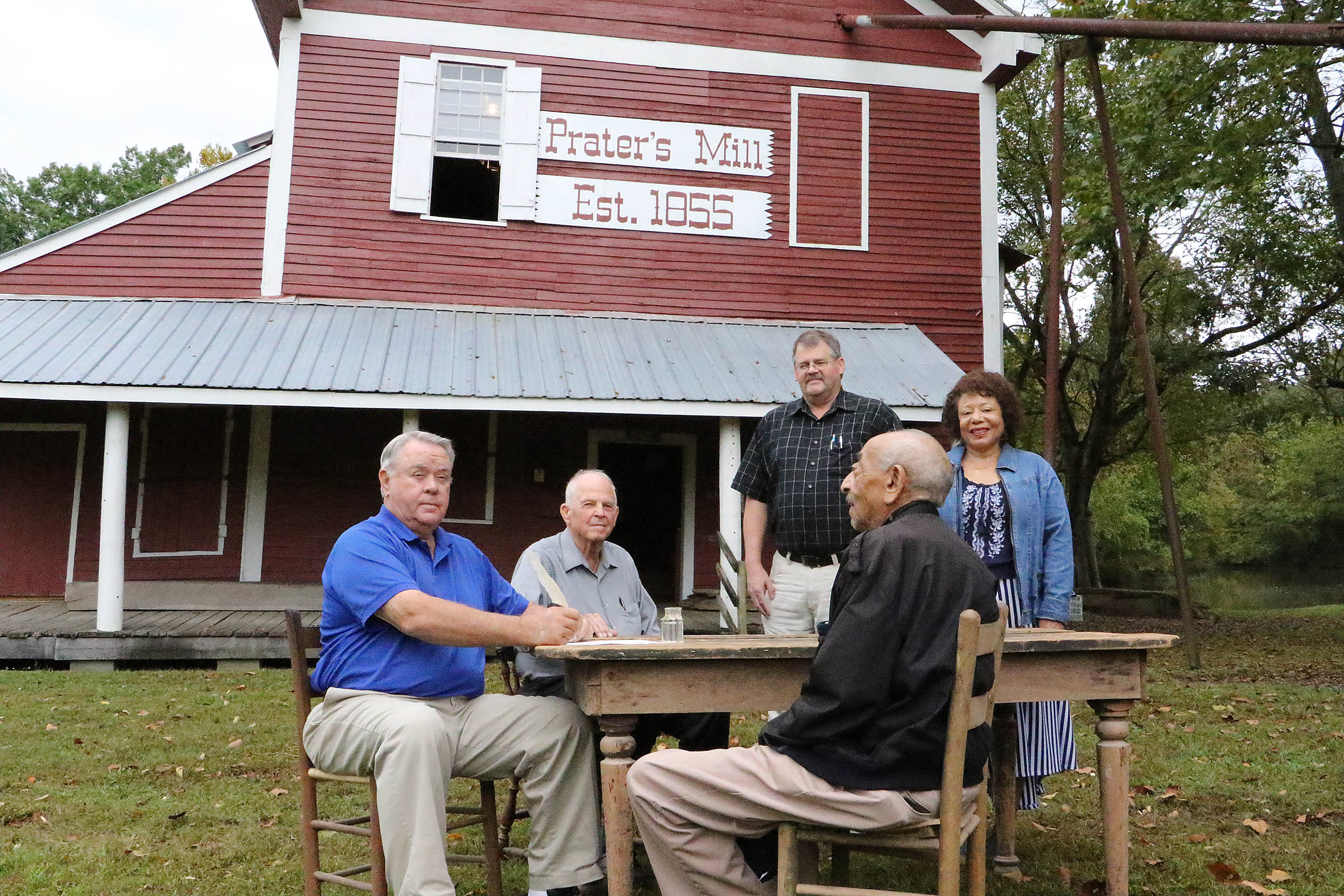 Prater’s Mill is a rare, 19th century, water-powered flour mill. The mill was built in 1855 by pioneer businessman John Pitner and was inherited by his son-in-law Benjamin Franklin Prater. The very successful, integrated mill complex had a sawmill, blacksmith shop, country store, cotton gin and housing for workers. These families living on the property also tufted bedspreads by hand and, eventually created Coahulla Chenille to make machine-tufted bedspreads. During the Civil War, the mill was occupied at various times by northern and southern troops and was spared destruction because it was essential to all.

Prater’s Mill is valuable as a surviving example of one of America’s oldest industries. Its array of extant machinery is astounding, as well as the wooden mill itself that houses the machinery. The Prater’s Mill site was listed on the National Register of Historic Places in 1978 and was designated a Whitfield County Historic Site with guidelines for preservation in 2019. Now owned by Whitfield County, the 80-acre site includes a 60-acre nature preserve.

On the second weekend in October, the Prater’s Mill Foundation sponsors the acclaimed Prater’s Mill Country Fair to raise funds to Save The Mill.

Whitfield County is the home of many extant Civil War sites and events, from the beginning of General William T. Sherman's Atlanta Campaign to the "Great Locomotive Chase".

The first major battle of General William T. Sherman's Atlanta Campaign was in Whitfield County, February 25, 1864 and a second one on May 8 - 11, 1864, in the Crow Valley area around Rocky Face Ridge Park and Dug Gap to the south. These sites were defended by Confederate General Joseph E. Johnston’s forces that were well entrenched on the surrounding hills and around Mill Creek, and who were successful in turning back the advances by Union forces. The success of this stand caused the Union commanders to avoid further attempts to take the Dalton area. Instead they proceeded south toward Atlanta west of the mountains. During this time however, many of Dalton’s buildings were destroyed.

The City of Tunnel Hill, located in the northwest part of Whitfield County, is rich in Civil War and railroad history. It is home to the infamous W & A Railroad Tunnel, a major player in the Great Locomotive Chase, and to the Clisby Austin House that served as a Confederate hospital during the Battle of Chickamauga and later as General Sherman's Headquarters during the beginning of the Atlanta Campaign in 1864.

Other Links Of Interest